Guerin Catholic Girls Varsity Golf Team member, Angelica Pfefferkorn, was recently recognized by the IndyStar as Female Athlete of the Week for the week of August 26-31. Angelica competed against 3 other female athletes for the honor but took the lead with 65% of the almost 4000 votes!  Angelica was nominated for her medalist and team win at the Circle City Conference meet on August 31.  In addition to a medalist win at the Ben Davis Invitational this year, Angelica also took first place this past summer in the Indiana Golf Association Junior Masters Tour!

The IndyStar recognizes male and female athletes of the week across the state in high school sports all year long.  As a recipient of the award, Angelica will join all nominee finalists at the fifth-annual IndyStar’s Sports Awards on May 3 at Butler’s Clowes Memorial Hall. 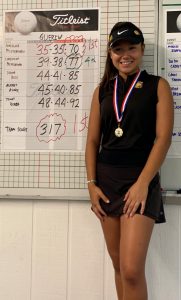 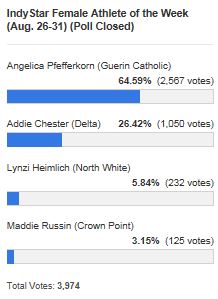