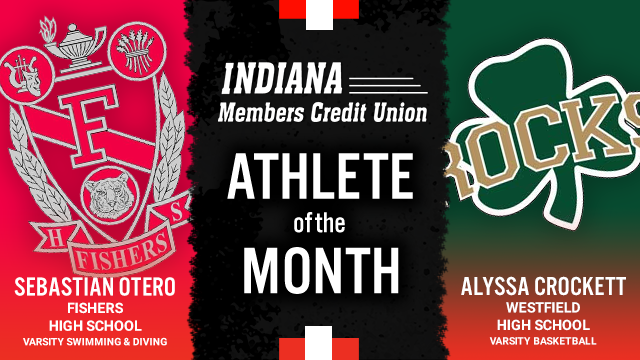 Want to nominate an athlete for your school next month? Click here to do so!

Maddi has averaged 17ppg in December while shooting 50% from the field and 41% from the 3pt line. Also averaging 5.5 asst and 5.7 rebounds helping to lead the Blazers to 19-0.

While playing the #1 toughest schedule in the state according to the Sagarin Ratings, the Greyhounds have an 8 game winning streak. Kate’s performance during that time period has led the charge for the team.

Molly Pedersen is having a fantastic season; she has shown great work ethic, strong reliability, and has been very consistent throughout the December and January competition phase. During that time and while facing the strongest competition in the state, she has scored over 200 points for her team, won 11 individual events and contributed to almost 20 relay victories for her team. This past weekend, she won the 100 Free, 200 Free, and was a member of the winning 200 Free Relay at the Hoosier Crossroads Conference Championships. She also had the great fortune to be a member of a relay that broke a pool record at Brownsburg High School in early December.

Jordan’s performace in the Holiday Tournament earned him a spot on the All-Tournament Team.