Guerin Catholic Athletics is proud to announce that girls golfer Angelica Pfefferkorn has been named the 2019-2020 Female Athlete of the Year. This is an award voted upon by the Guerin Catholic head coaches. She becomes the first female golfer to win the award.

Pfefferkorn was a team captain, a 4 year varsity letter winner and a 3 time state championship participant finishing 8th as an individual her senior year. Over the course of her career, she had 15 medalist finishes which included a 4 year scoring average of 74.1. She was also part of 4 straight Circle City Conference titles and the school’s highest ever team finish at the IHSAA State Finals, finishing 5th in 2018.

She will continue her career at Oklahoma State University in Stillwater, Oklahoma. Best of luck to Angelica and congratulations!

From Head Girls Golf Coach Mark Mathews:
“Angelica’s team leadership skills and her natural ability as a team captain made it a real joy to be her coach for 4 years. I’m really excited to follow her college golf career as she pursues her medical degree. ” 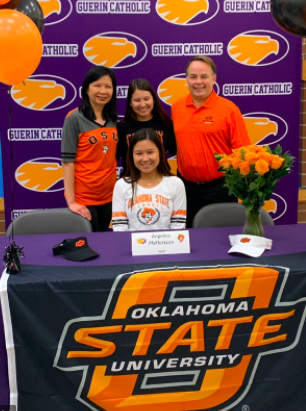